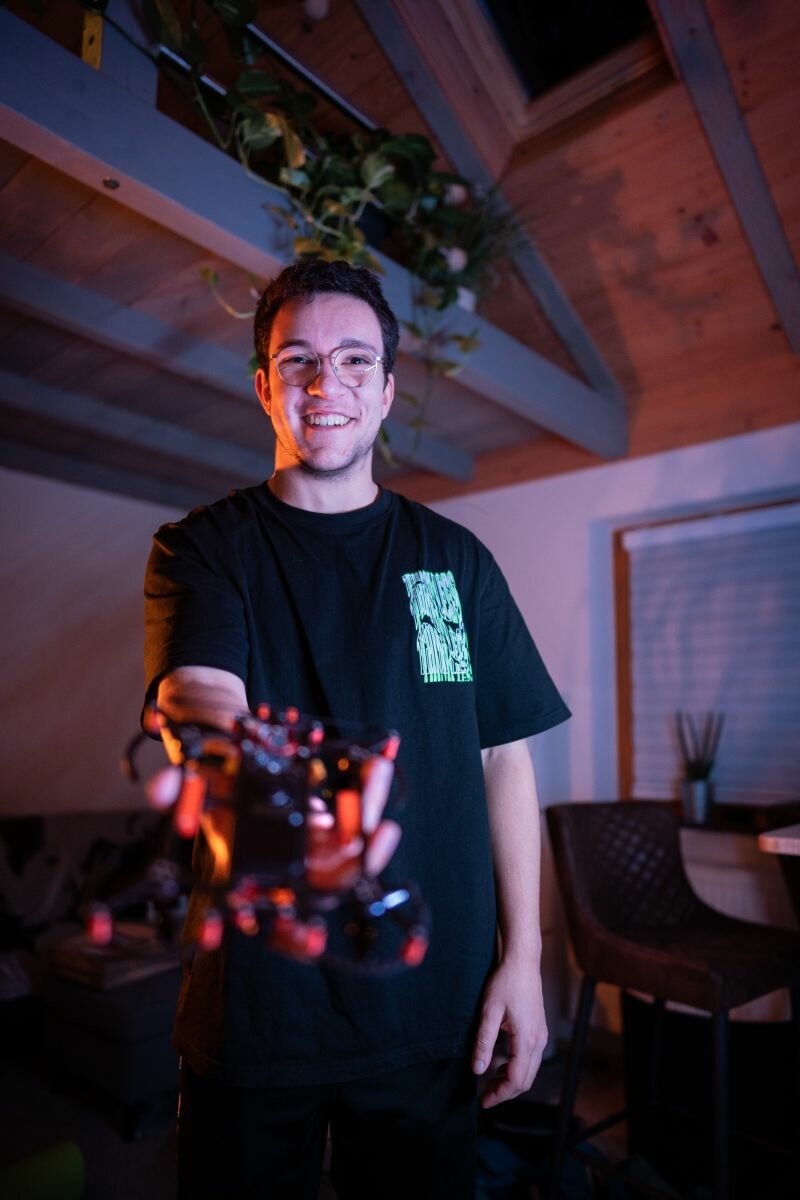 Kickstart to own company

Daniel Fuchs is the founder of the start-up threesixty-drones. His business idea is based on a specially designed drone for 360-degree video recording. Less than a year after presenting his innovation at the Deggendorf Institute of Technology (DIT), the 21-year-old is an independent entrepreneur and offers the creation of promotional videos using drones as a service. The "Kickstart Incubator" funding programme, which is still fairly new at the university, helped him along the way.

Innovative technology-oriented start-up projects or services with high customer value can apply for the Kickstart Incubator programme. For Daniel Fuchs, this was one of the most decisive factors, as it enabled him to finance the construction of the first prototype of the drone and part of his equipment. Particularly important for him was a free patent consultation, which he was able to take advantage of through the Kickstart Incubator programme. That's because the drone can capture 360-degree video footage without being visible in the video itself. Such footage was previously impossible with other 360-degree drones due to their size and inertia, making the project unique. Flying the drone creates realistic virtual tours of buildings. It can also easily fly over sensitive locations near people. Thus, for example, it is possible to fly past athletes at indoor sporting events up close and with maximum maneuverability as well as speed, or to fly between the dancers' feet at dance events.

During the 6-month funding phase, Daniel Fuchs was able to continuously draw on selected experts from DIT and the Start-Up Campus Team and exchange ideas with other founding teams. He also survived a drone crash or two. And even found a company partner. Together, they are now working on their first orders. You can contact Daniel Fuchs via his Instagram channel or via e-mail: mail@threesixty-drones.com

About the incubator programme

The Kickstart Incubator is a newly created programme for all founders of tomorrow. Innovative technology-oriented start-up projects or services with high customer value can apply for the programme. After successfully presenting the idea, the first step is to develop the business model and build the founding team. Selected experts from DIT and the Start-Up Campus team act as coaches and mentors for the young founders. Free access to the premises of the StartupLab creates a creative working environment and enables the exchange with other founding teams. With up to € 7,500 in funding per team, nothing stands in the way of building the first prototype. After completion of the incubator programme, the teams are ideally equipped for the upcoming start-up and ready for subsequent funding such as the EXIST founder scholarship. More information about founding can be found here: https://www.th-deg.de/startupcampus-en

Bild (Daniel Fuchs / threesixty drones): Daniel Fuchs is studying media technology in his fifth semester at the Deggendorf Institute of Technology and has recently founded his own company.