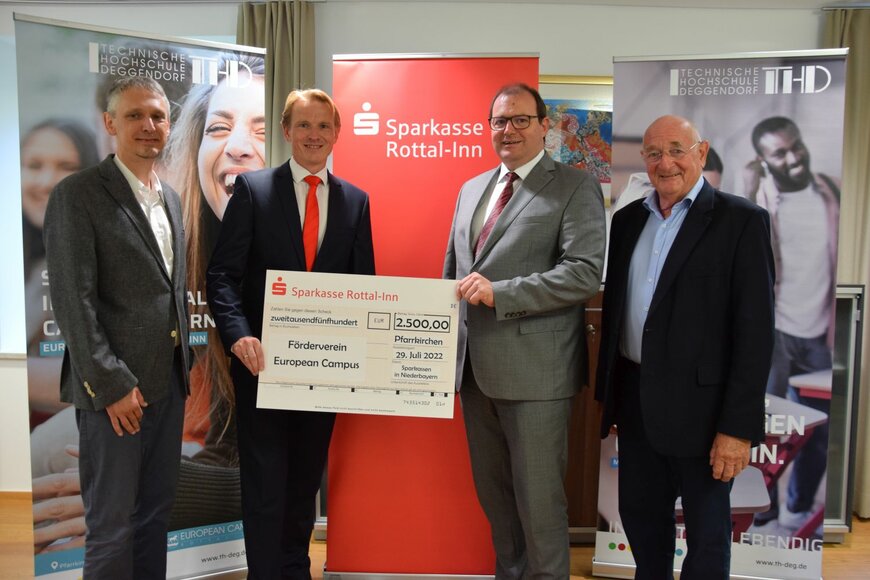 Sparkasse donates € 2,500 to the support association of the European Campus Rottal-Inn

The European Campus Rottal-Inn (ECRI) is pleased to announce a donation from the District Association of the Lower Bavarian Sparkassen to the ECRI Support Association. The cheque for € 2,500 will directly benefit the students, who will have access to a drinking water dispenser from October.

Martin Ruhland, Chairman of the Board of Sparkasse Rottal-Inn, presented the cheque from the District Association of the Lower Bavarian Sparkassen. Dean Prof. Dr. Georg Christian Steckenbauer and university coordinator Georg Riedl were also present when the cheque was handed over to Michael Fahmüller, the first chairman of the ECRI support association.

The money from the donation will go towards a water dispenser on campus, from which students will benefit from the coming semester. The water dispenser not only supplies fresh drinking water, but also counts how many plastic bottles are saved by students refilling their bottles. The project not only demonstrates how important it is to take care of water resources, but also how good the water quality is in Germany. For many students, drinkable water from the tap is so unimaginable that they resort to water from plastic bottles. With a project on drinking water, the university wants to sensitise students to the issue. For example, signs saying "Drinking Water" have already been placed on the taps in the university. Thanks to the donation from the District Association of Lower Bavarian Savings Banks, this project can be expanded to include a water dispenser and the built-in meter will make the extent to which this is done for the environment clear, thus contributing to sustainability.