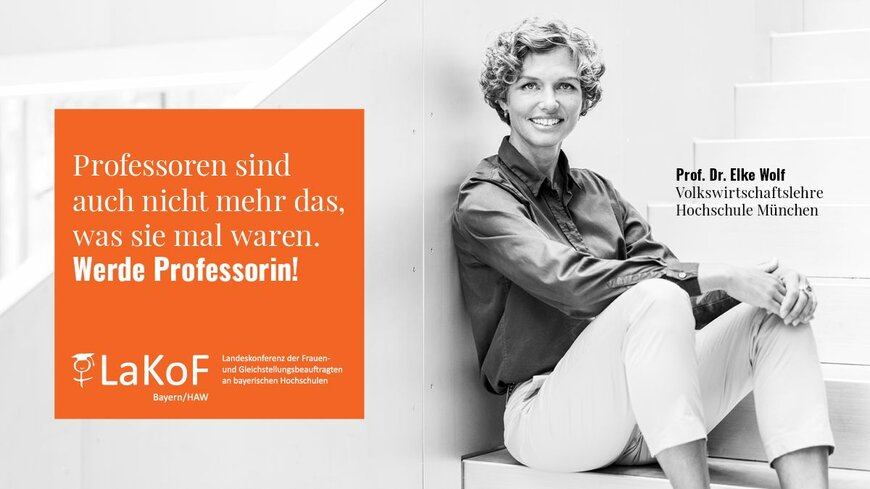 In Bavaria, only one in five professorships (21%) is held by a woman. This is despite the fact that, at 51 %, more than half of university graduates are women. For this reason, the State Conference of Women’s and Equal Opportunities Representatives at Bavarian Universities (LaKoF Bayern/HAW) is launching a Bavaria-wide campaign in 2021 entitled “Become a female Professor”. The aim of the campaign is to draw attention to the job profile of the female professor at universities of applied sciences (HAW) and to motivate women to take up this profession. Of course, this is also expressly supported by the Deggendorf Institute of Technology.

To launch the campaign, a virtual kick-off event will take place on Thursday, 7 January at 5 pm. The event will begin with greetings from Bernd Sibler, Bavarian State Minister for Science and the Arts, and Prof Dr Christiane Fritze, President of Coburg University of Applied Sciences and Deputy Chair of Hochschule Bayern e.V. This will be followed by a lecture on the topic of women in science by Prof Dr Jutta Allmendinger, President of the Social Science Research Centre Berlin (WZB) and Professor of Sociology of Education and Labour Market Research at Humboldt University Berlin.

Furthermore, the campaign “Werde Professorin” (Become a female professor” will be presented by Prof Dr Christine Süß-Gebhard, spokesperson of LaKoF and women’s representative of OTH Regensburg and Prof Dr Brigitte Kölzer, women’s representative of Technische Hochschule Rosenheim and project manager of the campaign. In addition, female professors will report on their professional experiences. Afterwards, the participants will have the opportunity to exchange ideas and ask questions in various breakout sessions. The event will be hosted by Prof Dr Elke Wolf, deputy spokesperson of LaKoF and women’s representative at Munich University of Applied Sciences.

Further information and registration for the virtual kick-off event is available at https://app.eu.veertly.com/v/kick-off-veranstaltung.

Bild (LaKoF Bayern/HAW): 51% of university degrees go to women. But only one in five professorships is held by a woman. According to the State Conference of Women’s and Equal Opportunities Representatives at Bavarian Universities, this should change.