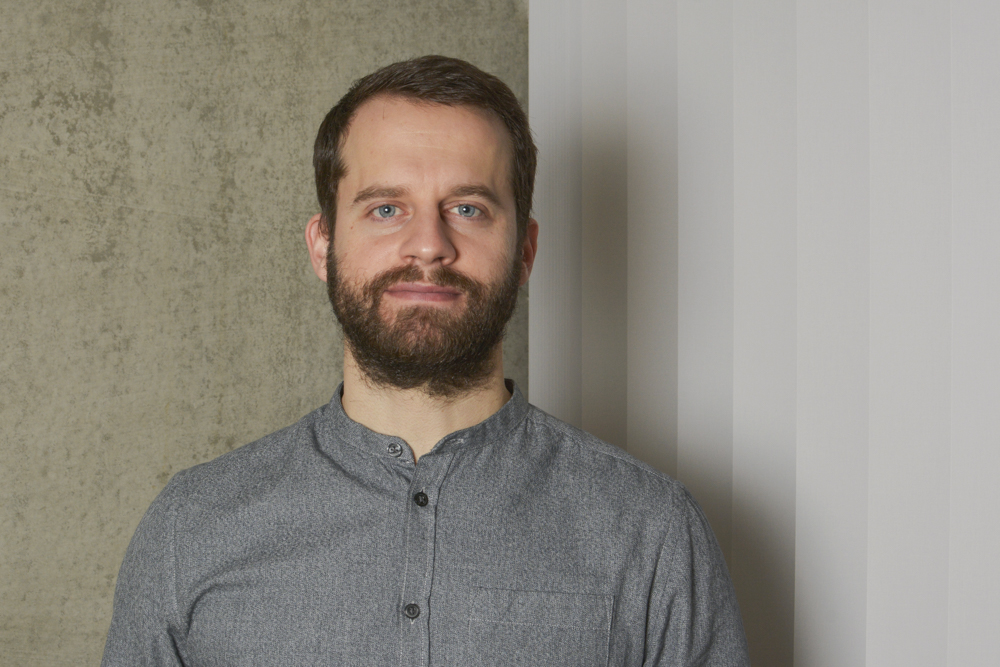 Diffusion driven high-temperature oxidation is one of the most important failure mechanisms of protective thin films in industrial applications. Within this study, we investigated the diffusion of oxygen at 800 to 1100 °C through nano-laminated crystalline Ti-Al-N and amorphous Mo-Si-B based multilayer coatings. The most prominent oxygen diffusion pathways, and hence the weakest points for oxidation, were identified by combining 18O tracer diffusion and atom probe tomography. An oxygen inward diffusion along column boundaries within Ti-Al-N layers in front of a visually prevalent oxidation front could be proven, highlighting the importance of these fast diffusion pathways. Furthermore, the amorphous Mo-Si-B layers act as barriers and therefore mitigate the migration of oxygen by accumulating reactive O species at a nanoscale range. Preventing oxygen diffusion along column boundaries – through the implementation of amorphous interlayers – lead to paralinear oxidation behavior and stable scales even after 7 h at 1100 °C. Our results provide a detailed insight on the importance of morphological features such as grain and column boundaries during high-temperature oxidation of protective thin films, in addition to their chemistry.
Zeitschriftenartikel
On the oxidation behaviour of cathodic arc evaporated Al Cr and Al Cr O coatings, vol. 163, pg. 1-9.

This study reports on the temperature-induced, ambient-air-exposure related structural and morphological evolution of various Alsingle bondCr and Alsingle bondCrsingle bondO thin films prepared by cathodic arc evaporation with 20 sccm Ar, 50 sccm O2, or 100 sccm O2 per active source (p.a.s. Detailed cross-sectional scanning electron microscopy (SEM) and X-ray diffraction (XRD) studies are conducted on as-deposited coatings and samples that have been oxidised for 3 h at 900, 1050, and 1200 °C. The high affinity of Al to O promotes the formation of essentially pure α-Al2O3 during oxidation starting between 900 and 1050 °C of the coatings prepared with 20 sccm Ar or 50 sccm O2 p.a.s. and cathodes with Al content ≥50 at.%. However, the Alsingle bondCrsingle bondO coatings prepared with 100 sccm O2 p.a.s. form solid solution α-(Al,Cr)2O3 oxides with Al/Cr ratios according to the used Alsingle bondCr cathodes upon thermal exposure to ambient air. The phase composition (prior to oxidation) strongly determines the oxide phase formation. A sufficient intermixing of Al, Cr, and O (with about 60 at.% O) is needed to form α-(Al,Cr)2O3 oxides, otherwise the high affinity of Al to O would rather lead to the formation of Al2O3.
Zeitschriftenartikel
In-situ XRD studies of arc evaporated Al-Cr-O coatings during oxidation, vol. 358, pg. 934-941.

The structural evolution of cathodic arc evaporated Al-Cr-O coatings with hugely different Al, Cr, and O contents was investigated by in-situ XRD measurements upon annealing in oxygen up to 1200 °C. Different chemical compositions are achieved by arc evaporation of Al0.90Cr0.10, Al0.75Cr0.25, Al0.70Cr0.30, Al0.50Cr0.50, or Al0.25Cr0.75 cathodes and using either 20 standard cubic centimetres per minute (sccm) Ar, 50 sccm O2, or 100 sccm O2 per active source (p.a.s.). Generally, the crystallinity of the as-deposited coatings decreases with increasing O2 flow rate during arc evaporation, while their Al/Cr ratio increases significantly (with respect to the cathode composition). The coatings prepared from Al-rich cathodes show first indications for the formation of corundum structured α-(Al,Cr)2O3 phases at ~900 °C during annealing in O2 atmosphere. Those, prepared from the Cr-rich cathode (Al0.25Cr0.75) with 20 sccm Ar or 50 sccm O2 p.a.s., exhibit the formation of α-(Al,Cr)2O3 phases already at 700–800 °C. Their corresponding coatings prepared with the highest oxygen flow rate of 100 sccm p.a.s., exhibit a considerable phase fraction of α-(Al,Cr)2O3 already in the as-deposited state. Upon oxidation at 1200 °C, most coatings are basically composed of α-oxides, with a wide range of their Al/Cr-ratio. The coatings prepared with 100 sccm O2 p.a.s., however, show the formation of α-(Al,Cr)2O3 with a rather narrow Al/Cr-ratio, which is due to the sufficient mixing of Al, Cr, and O species already in the as-deposited state. Furthermore, selective oxidation (preference for Al2O3) leads in most cases to the formation of Cr, which is detectable up to 1200 °C. Between 950 and 1050 °C, the formation of θ-(Al,Cr)2O3 could be detected for cathodes with Al ≥ 50 at.% prepared with 20 sccm Ar or 50 sccm O2 p.a.s. Coatings prepared with Al0.75Cr0.25, Al0.70Cr0.30, and Al0.50Cr0.50 cathodes and 100 sccm O2 p.a.s. show the formation of θ-(Al,Cr)2O3 already in the as-deposited state. α-(Al,Cr)2O3 could only be detected for as-deposited coatings when preparing them with Al0.25Cr0.75 and 100 sccm O2 p.a.s.
Zeitschriftenartikel
On the oxidation behavior of cathodic arc evaporated Al-Cr-Fe and Al-Cr-Fe-O coatings. I, vol. 37, pg. 041503.

In: Journal of Vacuum Science & Technology A

Arc evaporated Fe-alloyed intermetallic Al-Cr and corresponding substoichiometric oxides [by introducing either 50 or 100 sccm O2 per active source (p.a.s.) during the deposition] were investigated with respect to their oxidation behavior after annealing in ambient air between 900 and 1300 °C for different durations. The authors could thereby show that depending on the initial coating morphology and chemical composition, significantly different microstructures evolve. The intermetallic coatings initially form metastable alumina scales, which transform into the thermodynamically stable corundum (α-Al2O3) structure during annealing in ambient atmosphere. Coatings prepared with 50 sccm O2 p.a.s. show α-Al2O3 already after 3 h at Tox = 900 °C, whereas (Al1–x–yCrxFey)2O3 solid solutions are only detected after oxidation of the coating grown with 100 sccm O2 p.a.s. for higher oxidation temperatures. Thereby, the presence of Fe (in particular, 5 at. %) leads to the formation of one (Al1–x–yCrxFey)2O3 solid solution without additional α-Al2O3 fractions.
Zeitschriftenartikel
Microstructure and phase evolution of gradually-structured arc evaporated Al0.25Cr0.75-based oxide coatings, vol. 155, pg. 645-649.

The structural evolution from the (inter)metallic to the oxide-stoichiometric regime within oxygen-gradient Al0.25Cr0.75-based coatings was investigated by transmission electron microscopy (TEM). Grain refinement of the (inter)metallic Cr(Al) structure — induced by the addition of oxygen to the growth process — is less significant than for the higher Al-containing Al0.50Cr0.50-based coatings. Our detailed TEM studies clearly show that between 110 and 120 sccm O2 per active Al0.25Cr0.75-source (corresponding to 0.7–0.9 Pa), the coating structure changes from partially oxidised — where (inter)metallic Cr(Al) particles are encapsulated by amorphous-like Al-rich oxides — to a columnar, corundum-type sesquioxide structure. Contrary to the higher Al-containing Al0.50Cr0.50-based coatings, this transformation takes place without the formation of metastable cubic (Al1-xCrx)2O3 structures.
Zeitschriftenartikel
On the phase formation of cathodic arc evaporated Al1−xCrx-based intermetallic coatings and substoichiometric oxides, vol. 352, pg. 392-398.

The phase evolution of Al1−xCrx-based intermetallic coatings and corresponding substoichiometric oxides grown by cathodic arc evaporation was investigated in order to obtain a better understanding of the relation between oxygen flow rate, Al and Cr content, and structural evolution of the coatings deposited. When using 20 sccm Ar, or 50 sccm O2, or 100 sccm O2 per active source (p.a.s.) the cathode reaction zone consists of various intermetallic Al-Cr-compounds, which are in good agreement with the binary Al-Cr phase diagram. This is generally also reflected in the phase composition of the metallic and substoichiometric oxide coatings. The Al-rich compositions, Al0.75Cr0.25 and Al0.70Cr0.30, show a strong tendency for the formation of γ1-Al8Cr5 phases. Mostly, the coating compositions of the metallic constituents of the synthesised intermetallic and substoichiometric oxide coatings deviate from the elemental compositions of the cathode, show enrichment in Cr. This deviation is more pronounced for Cr-rich cathodes using low O2 flow rates during deposition. The dense columnar structure of the intermetallic coatings (hardness values between 2.5 and 10.2 GPa) turns into a nano-composite-like morphology for depositions with 50 and 100 sccm O2 p.a.s., which in turn leads to a significant hardness increase up to ~24 GPa. Among all coatings investigated, the Cr-rich compositions have higher hardness and denser morphology than the Al-rich layers.
Zeitschriftenartikel
Structure, mechanical properties, and thermal stability of arc evaporated (Al1-xCrx)2O3 coatings, vol. 342, pg. 37-47.

Cathodic arc evaporated (Al1-xCrx)2O3 coatings, prepared from powder-metallurgically produced Al0.75Cr0.25, Al0.70Cr0.30, Al0.50Cr0.50, and Al0.25Cr0.75 cathodes using an industrial-type batch facility were investigated with respect to their microstructure, mechanical properties, and structural evolution upon annealing in vacuum and oxidising atmosphere. Both Al-rich coatings crystallise in a mixed microstructure consisting of a corundum-type solid solution and fine-crystalline metastable cubic phase fractions. The latter irreversibly phase transform into α-(Al1-xCrx)2O3 between 800 and 1050 °C, which either proceeds via a γ- or θ-structured intermediate stage depending on the annealing environment (i.e., vacuum or flowing O2). Both Cr-rich coatings initially crystallise in a corundum-type solid solution, and are therefore not affected from any phase transition upon annealing to at least 1500 °C. Hardness and indentation moduli of our coatings are, next to the phase composition, strongly related to the microstructure but also the substrate material used, showing a relatively large spread from 11 to 23 GPa for H and 190 to 375 GPa for E, respectively.
Zeitschriftenartikel
Impact of Si and B on the phase stability of cathodic arc evaporated Al0.70Cr0.30-based oxides, vol. 152, pg. 107-111.

Al0.70Cr0.30-, Al0.665Cr0.285B0.05-, and Al0.665Cr0.285Si0.05-based cathodic arc evaporated oxides were investigated with respect to their structural evolution during vacuum annealing. Unalloyed (Al0.69Cr0.31)2O3 crystallises with a mixed phase microstructure composed of corundum (α) and metastable cubic and γ-/θ-type phases. Alloying 5 at.% of B or Si to the cathodes results in significant grain refinement of the coatings and the suppression of the α-phase in as-deposited state. In addition, the thermally-induced phase transition from metastable into singe-phased α-structured coatings is effectively shifted from ~900 °C to 950 °C or 1150 °C, respectively.
Zeitschriftenartikel
Oxygen dependent morphology and mechanical properties of Al Cr (Fe)-based coatings, vol. 349, pg. 103-110.

Fe-alloyed intermetallic Al–Cr coatings as well as substoichiometric oxides (with respect to M2O3 stoichiometry) thereof were synthesised by reactive arc evaporation in order to investigate the impact of Fe and the oxygen flow rate during deposition on the structural evolution and mechanical properties. All coatings prepared in non-reactive conditions crystallise in a γ2-type Al8Cr5 structure with Fe substitutionally incorporated in the lattice featuring hardnesses in the range of 11 ± 1 GPa. By introducing oxygen to the process, the growth morphology changes from columnar to a nano-composite-like structure of small Cr-enriched crystallites embedded in an amorphous matrix. Simultaneously, the number of droplets and therewith associated defect structures increases and accordingly the hardness values of these films decrease to 8.5 ± 1 GPa. For oxygen flow rates close to the transition from substoichiometric to stoichiometric sesquioxides (~0.7–0.9 Pa), the crystallinity as well as the fraction of strong oxide bonds increase and highest hardnesses among all coatings investigated are obtained (>20 GPa). Furthermore, small additions of Fe to Al0.7Cr0.3 cathodes effectively improve the structural and mechanical properties of substoichiometric oxide films.
Zeitschriftenartikel
Selective phase formation in substoichiometric Al-Cr-based oxides, vol. 139, pg. 144-147.

The transition from (inter)metallic to substoichiometric regime and therewith associated microstructural modifications within arc evaporated Al-Cr-based oxide coatings was investigated. The dense columnar intermetallic structure is subject to grain refinement when increasing the O2 flow rate during the deposition. Cr-rich, O-depleted crystalline domains (initially short columnar, then equiaxed globular) and an amorphous Al- and O-enriched boundary phase develops—with increasing volume fraction for higher O2 flow rates. Such nanocomposites, originating from preferred oxide phase formation of Aluminium, can effectively be adjusted by the amount of oxygen and the nominal cathode composition used during synthesis.
Zeitschriftenartikel
On the phase evolution of arc evaporated Al-Cr-based intermetallics and oxides, vol. 644, pg. 120-128.

(Al,Cr)2O3 solid solutions in corundum-structure are of great potential for protective applications facing severe mechanical and thermal conditions. In order to elucidate the influence of cathode composition and reactive gas flow on the phase formation of (Al1‐xCrx)2O3, Al0.75Cr0.25, Al0.70Cr0.30, Al0.50Cr0.50, and Al0.25Cr0.75 cathodes were utilised to synthesise coatings with and without oxygen reactive gas. Transmission electron microscopy studies reveal successive microstructural modifications from intermetallic coatings towards oxides with M2O3 stoichiometry. The transition from substoichiometric (suggesting intermetallic γ2-Al8Cr5, AlCr2, and/or Cr structures with distorted lattices due to oxygen incorporation) to stoichiometric oxides is connected with the formation of metastable cubic (Al,Cr)2O3 phases for Al-rich compositions. With decreasing Al-content of the cathodes, the critical oxygen flow for this transformation increases (i.e., 380 sccm for Al0.75Cr0.25, 400 sccm for Al0.70Cr0.30, and 420 sccm for Al0.50Cr0.50). Only when using the high-Cr containing Al0.25Cr0.75 cathode, the coatings directly crystallised with corundum-type (Al,Cr)2O3-solid solutions for O2 flow rates above ~ 570 sccm.
Cookies